Breakfast by the Bay – Looking Forward: Universities and the Future

Breakfast by the Bay
Looking Forward: Universities and the Future

With Professor Amit Chakma
Vice-Chancellor, The University of Western Australia.

Join Professor Amit Chakma, Vice-Chancellor of the University of Western Australia at Breakfast by the Bay where he will be discussing the future of universities.

In these challenging times for the entire global community, universities need to combine a positive outlook with a practical, realistic approach. We are all aware of the confronting realities, but there are other realities which point the way forward.

There are remarkable people at UWA, who are doing extraordinary work. They are reaching out to the community across our vast State; working on their problems and finding solutions.

We must respect and consider different perspectives, and strengthen our connections with our community in all its aspects. That community is, first and foremost, the people of Western Australia. UWA has played a vital role in the development of the State since our foundation in 1911. We want to continue to play that role, and we know how to do it.

Discoveries and progress are made by the hopeful. Universities, the creators of new knowledge, serve their community best by ensuring that hope is built on the foundation stones of a constantly updated understanding of scientific, social, cultural, political and economic reality. Here at UWA, our foundation stones are firmly in place and we are determined to preserve, protect and enhance them. 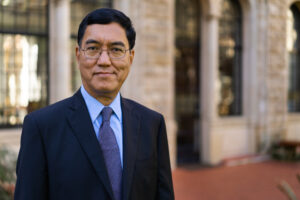 In addition to his university leadership roles, Professor Chakma served as Chair of the Council of the Association of Commonwealth Universities from 2017 to 2019. He was the Acting Chair of the Board of Trustees of the Asian University for Women from 2013 to 2015, and chaired Canada’s Advisory Panel on International Education Strategy from 2011 to 2013.

Price includes a two-course breakfast and presentation by Professor Amit Chakma, Vice-Chancellor of the University of Western Australia